The key fob has to be one of the most mundane aspects of a car especially in today’s modern setting where the conversation is more likely to be centered around the car’s performance and design. Who honestly remembers a key fob in a heated discussion about the fastest or most powerful automobiles ever made? However, that has not stopped carmakers and custom aftermarket companies from being quite creative and ingenious when it comes to key fobs. It’s not just the design but it’s also about the incredible amount of technology that is incorporated into the function of the small gadget, often designed to fit easily in one’s palm.

The traditional notion of using the key just to unlock and start up the car has been dispelled. Now, they are capable of so much more; a nod to how far the industry has evolved. Here are some of the coolest key fobs out there today by virtue of design, function, or a combination of both.

Another person who’s obsessed with details and art when it comes to automobile design is Horacio Pagani, the brain behind the Huayra hypercar. so you can understand why there is nothing conventional about the Huayra’s key. It is actually a miniature model of the car and is made from the same aluminum alloy used in making the car’s wheels.

What’s more? It splits down the middle into 2 parts; one part contains the key used to fire up the hand-built V12 AMG powerplant while the other half contains, curiously enough, a USB.

Christian Koenigsegg does not do things by half-measures and the fob for the Regera is just one more proof of that fact. The lovely shield design is a nod to the Koenigsegg’s family coat of arms and the key itself can be factory-customized with premium materials like platinum and diamonds.

The key also includes what’s known as the ‘autoskin’ function; a feature that allows the car owner to open and close the front luggage door, the rear engine cover door, and both passenger and driver doors. Then there’s the cool ‘Ghost’ button that brings up the car’s neat party trick as shown in the image above.

Kia knew they had to really up their game if they were going to take on the likes of Audi and BMW with their Stinger sports sedan. The car boasts bold styling cues that filtered to the design of the key fob as well.

The key bears a striking resemblance to a remote detonator with the ‘lock’ button incorporated into the flattened top edge of the fob. Also, the other buttons that control some other functions of the car are arranged along the narrow side of the fob rather than the more traditional placement on either face.

Related: Here’s What We Expect From The 2022 Kia Stinger GT

Jaguar debuted this unique item as a standalone option with their 2017 F-Pace SUV. It is a lightweight, shockproof, and waterproof wristband that can lock and unlock your vehicle among other functions, thus eliminating the need to carry a conventional key fob around.

This wearable solution allows you to keep your key safely locked in the car while you are out and about, shopping, hiking, or swimming at your favorite weekend getaway. It is certainly not cheap at over $500 but for those with the change to spare, it is definitely one cool gadget to have.

The German powerhouse debuted a new kind of key fob with their 7 Series flagship models back in 2015. It was a really fancy piece of equipment that came with its own full-color LCD touch screen and had a range of almost a thousand feet.

In addition to the basic functions of locking and unlocking your vehicle, this device also allows you to access a wealth of information about the vehicle. If that isn’t cool enough, you can even remote park the vehicle with the key fob. Today, BMW has expanded the key fob offering to other premium models in the lineup.

The Chiron is a modern automotive marvel; one that pushes right up against the boundaries of current technologies. it is also quite expensive and costs anywhere north of $2.5 million depending on customization options. It follows therefore that the key fob should also be quite special.

Every Chiron comes with 2 keys but it’s the second one – the speed key – that finds its way onto this list. Without it, the Chiron will only reach a ‘measly’ 236 mph. However, to unlock the full power of the W16 engine, the speed key has to be inserted into a special slot. You may want to hold on for dear life after that.

Related: Can A Bugatti Chiron Outrun A Formula 1 Car In A Drag Race?

It is possible to unlock and start your Tesla Model S with your smartphone. However, the tech geniuses have also provided a really cool key fob that allows you to do the same thing and much more with a few taps.

Like the Pagani Huayra, the fob is a miniature model of the car and it does have some neat little features built-in. For example, you can unlock any door or trunk lid of the Tesla by tapping the corresponding position on the key fob. The key fob was also designed to retain some functionality even when the battery dies.

The name given to this key fob has us scratching our heads. Clearly, the lads at Aston Martin want you to think of their fancy gadget as anything but an ordinary key to start up the car. To be fair, it does seem rather silly to refer to a key by that name but you can at least understand the logic behind it especially when you actually see it.

The key fob is an elegantly crafted mix of sapphire crystal and steel. It must feel supremely cool to be able to start up the car by slotting the fob into a space in the dash and pressing down on the glass-covered end until the engine turns over.

The Volvo key fob can be used to lock and unlock doors, the tailgate, and the fuel filler door. It can also be linked to different driver profiles to store personal settings in the really neat vehicle. However, one of the most impressive features has to be the design of the fob itself.

Like the Kia Stinger, the buttons are arranged along the sides, leaving the face and the rear bare except for the Volvo logo. It is a design that projects class without being too obvious about it. The customer can also choose to have the fob finished in the same color as the leather on the interior of the car.

Some people have the cash to spare and will go to great lengths to stand apart from the crowd. Awain, a luxury goods company based in Finland, exists to cater to the needs of such people and their custom-made car key fob rightly deserves a spot on this list. In 2019, the company debuted a special key fob that cost a staggering $563,000.

That’s more than the price of the Ferrari 812 Superfast! The key is predictably jewel-encrusted with diamonds and other precious stones on a base that includes 175 grams of 18-carat gold. The company made only one piece to preserve its exclusivity but they have other less expensive key fob creations that cost anywhere from $50,000 to $100,000.

A simple bloke with a not-so-simple car obsession!

Everything New in the iOS 15 Messages App: Shared With You, Photo Collages, Memoji Updates and More

Mon Jul 19 , 2021
Apple’s FaceTime app was the main focus for many of the iOS 15 updates that were introduced, but the Messages app wasn’t entirely forgotten. Apple introduced a new Shared with You feature and streamlined several interface elements to make the Messages experience more pleasant. This guide outlines all of the […] 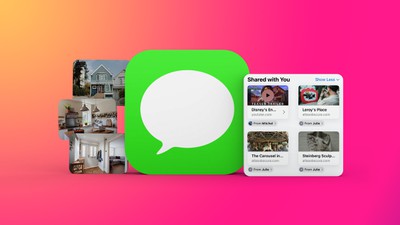