MENTOR, Ohio — Manufacturers around Mentor and the surrounding community are taking their own steps to create the next generation of well-trained workers in Northeast Ohio with the skills to work in that industry in the future.

Alliance for Working Together (AWT) is breaking ground on its roughly $3 million Transformation Center, a training facility they’ll use to help train manufacturing workers in Northeast Ohio in the technology they need to know for the next generation of manufacturing jobs.

“A lot of people don’t understand that manufacturing is very high-tech, especially the way that we’re moving,” said AWT Executive Director Juliana Petti. “We need a blend of people who are the ‘Gray-collar workforce.’ They have technical skills but they work in offices too.”

A few minutes on a manufacturing floor shows you that they are just as loud as they’ve ever been, but in 2021, they have a lot more computer screens and the workers have a lot less dirt under their fingernails.

“We need to get to a point where the so-called ‘heavy work’ and lifting is being done by the machines that we put into place,” said G&T Manufacturing Vice President Colin Cutts.

That’s why G&T Manufacturing has already heavily invested in automated technology that not only saves workers from doing routine and heavy lifting but also frees up those workers to operate multiple machines at once by handling repetitive tasks.

“Right now, it says it’s 15 ahead because it’s unloading and loading,” said Cutts, looking at a computer screen that shows him how the machine is operating compared to predetermined metrics. “We can always continuously see if we’re running and hitting our targets.”

“Modern manufacturing is 90% geared around what we do on a computer,” said AWT Instructor and Curriculum Developer Matt Kulbis. “Traditionally we’ve seen business have 20-some operators and maybe one programmer for those 20 operators.”

That disparity means there could be few workers who know how to program computerized machinery, creating a backlog of work if that one worker calls out sick, is on vacation, or leaves for another position.

The goal is to train more workers on the necessary computer programming skills so more people can do that kind of work.

AWT’s website says it is “a small, informal group of manufacturers, who met to discuss topics of interest and best practices among local manufacturers.”

One of the biggest problems is finding workers to fill open positions.

“If you knock on any manufacturer’s door right now and ask what their biggest problem is, it’s going to be finding workers,” said Spence Technologies President Sara Spence.

She says companies often try to train up workers so they know what they need but that’s also often limited.

“We provide some training on the shop floor but it’s hard,” said Spence. “We don’t have the time and resources to provide that full training.”

That’s why companies like Spence Technologies and G&T Manufacturing are supporting AWT’s $3 million Transformation Center which breaks ground Monday in Mentor right next to the Fredon Corporation, whose CEO Roger Sustar founded AWT.

Right now, AWT companies are working through the specific technology they’ll train workers on during the existing apprentice program. Right now, AWT already runs an apprentice program where local companies send employees to training during the week. It’s paid for by the company and free to the worker, giving them the skills they need to succeed at their current positions or advance their careers.

His shop already largely uses automated machinery but the apprentice program gives him other skills that round out his overall knowledge and positions him for more responsibility in the shop.

That means more jobs and the need for more workers at a moment when industry leaders agree well-trained workers are in short supply. AWT’s training program tries to change that.

Manufacturers are turning to high school students and local school districts to build up the next generation of workers.

The Lake Shore Compact works with students in Mentor, Wickliffe, and Euclid school districts to introduce them to technical jobs, allowing them to get both college credit and make progress towards industry-recognized technical credentials at the same time. Regardless of the path they choose after high school, the program allows them to get a head start.

“It’s really more of a case for how well Ohio is doing,” said Lake Shore Compact Director Dr. Joe Glavan. “When you look at Governor DeWine and Lieutenant Governor Husted, they’ve really been leading the way with their workforce development, with their TechCred initiatives.”

Building up Ohio’s workforce has been one of Lt. Gov. Husted’s projects, serving as Governor DeWine’s Director of the Governor’s Office of Workforce Transformation. TechCred reimburses employers for enrolling employees in programs that can get them new credentials. It’s helped AWT companies cover the cost of the apprenticeship program and just opened its 10th application period in July.

“They’re really pushing industry-recognized credentials, helping the next generation have a valuable skill to take into the workforce,” said Dr. Glavan.

If you’re looking for a job or new career, check out News 5 Cleveland’s job board here.

Download the News 5 Cleveland app now for more stories from us, plus alerts on major news, the latest weather forecast, traffic information and much more. Download now on your Apple device here, and your Android device here.

Poll: What do you think of the latest Safari design in iOS 15?

Tue Aug 24 , 2021
We are at least one month away from Apple releasing iOS 15 to the public. After a lot of controversies with Safari’s new look, the company has finally managed a way to please most of the beta users. How do you feel about Safari design in iOS 15 now? Safari […] 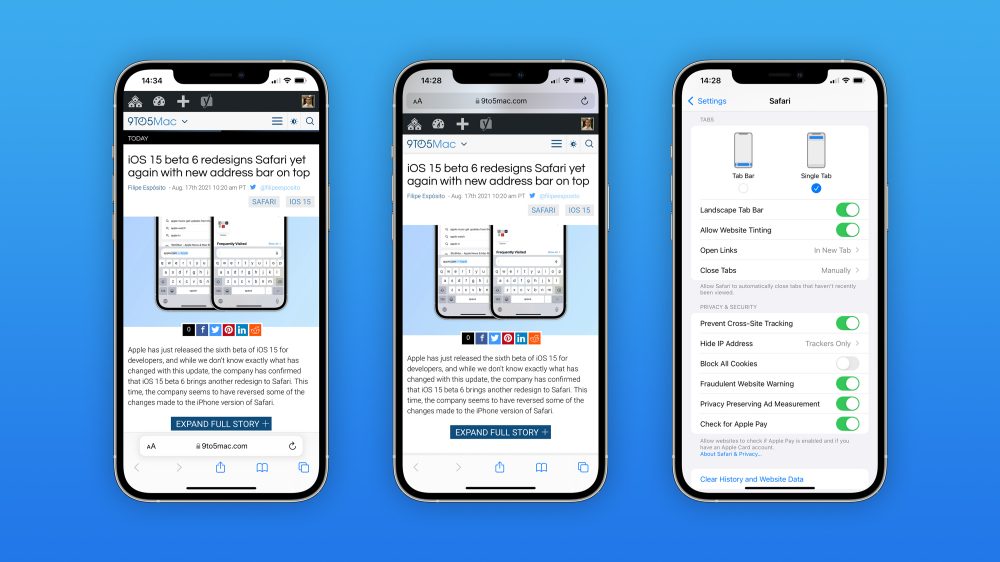