ROCKY MOUNT, N.C. — Across the well-manicured homes in this city’s subdivision of Fairfield, Jeff Stanovich never thought that he would be hunched over his router wishing his internet would work.

It’s a near daily routine. Unplug the modem, wait 45 seconds, plug it back in, wait for the blue lights to all come back on.

“And then if I’m lucky, internet recycles and I’m able to use it. Doesn’t always happen. There’s a lot of times I have to do it multiple times to get it to work,” said Stanovich, who set up his work-from-home desk less than 10 feet away from the router in an effort to improve the situation.

But just 20 miles south on I-95, residents in Wilson County have some of the best internet in the nation. That’s because in 2008 the city of Wilson established its own broadband service, called Greenlight Community Broadband, and began wiring the entire county with fiber optic cables.

“When the pandemic hit, we were able to prioritize getting our teachers and students connected,” said City Manager Grant Goings.

Michelle Galloway was one of those teachers who needed to be connected. Her house, surrounded by wheat fields on a road that is mostly trafficked by combines and tractors, is not wired for broadband. Suddenly teaching remotely for the first time, she sometimes had to teach via chat because the video and audio just wouldn’t work.

“Sometimes I would cry after a class was over, knowing that I had done such a poor job communicating with my students,” Galloway said.

During spring break, she called Greenlight and they arranged to get her connected, even though the nearest connection point was over a half mile away. Today, her fiber optic connection is so strong that her remote students can see the wheat harvest over her shoulder in high definition.

But the widely different internet experiences of North Carolina residents ilke Stanovich and Galloway reflect the broader problems facing more than 30 million Americans who live in areas where the internet infrastructure simply isn’t there. This disproportionately affects rural and tribal areas because it’s just too expensive for private companies to install the wiring. The farther homes are spread apart, the lower the return on investment.

So some cities and counties across the country have decided to build broadband as a utility for residents, just like water or power.

“This is critical infrastructure like the highways that we drive on,” said Goings. “We can all agree that people need water to drink, whether it’s profitable or not.”

While the Biden administration’s American Jobs Plan aims to fix this with a goal of providing coverage to every household, prioritizing smaller groups like Greenlight, that doesn’t help in North Carolina. After Greenlight was built, the telecommunications industry pushed through a state law prohibiting any more cities from building their own internet networks, even as rural residents begged for more options.

In 2006, after beginning to build the backbone of a fiber optic system for the city, Wilson officials reached out to Time Warner Cable, which was the cable provider at the time, about a possible partnership; the city would build the infrastructure and the cable company would operate it.

But Goings said the company was “combative” toward the proposal.

“I believe our City Council sort of had an epiphany and said, ‘You know what, no board of directors in New York City is going to decide what infrastructure our community has. And so if you don’t want to partner with us, we’ll do it ourselves,’” Goings said. “I don’t know that we were taken seriously at that moment in time. But I think we are now.”

But Wilson officials said that because this new service competed with the cable company, the company wouldn’t let that happen without a fight. Time Warner Cable would not only not invest in Wilson, “but immediately started seeking legislation in the General Assembly to prevent us from investing in ourselves,” Goings said.

As the city of Wilson pressed ahead with building out Greenlight, Time Warner Cable, along with the North Carolina Telecommunication Association, an industry lobby group, lobbied the North Carolina General Assembly for a state bill to make it nearly impossible for a city to run its own internet service.

The legislation failed in 2007, and a year later Wilson launched Greenlight, with over 1,000 homes connected by the end of 2008.

Time Warner Cable was acquired by Charter Communications in 2016. A spokesperson for Charter told NBC News: “We can’t speak to what Time Warner Cable may have done 10 years before Charter acquired the company. We welcome competition and are proud of our record of building, maintaining and upgrading our networks.”

In the meantime, the North Carolina Telecommunication Association continued lobbying to pass the bill. Over the course of six years, the telecommunication industry gave $1.6 million to state candidates and political parties, according to an analysis by OpenSecrets, a nonpartisan research group tracking money in politics. AT&T gave over $520,000 and Time Warner Cable (now Spectrum) and CenturyLink each gave over $300,000.

Then, in 2011, both chambers of the North Carolina General Assembly were won by Republicans for the first time since Reconstruction. The bill passed and was signed into law.

Wilson and Salisbury, North Carolina, the only other municipal-run broadband network in the state, were granted a waiver to allow their programs to continue. Greenlight was restricted from expanding past the edge of the county, despite the technical capacity to do so.

The law that led to an effective ban on city-run internet in North Carolina was part of a nationwide, coordinated effort to pass state legislation that favored major telecommunication companies over municipally operated networks.

The campaign was led by the American Legislative Exchange Council (ALEC), an industry-sponsored political consultancy that often promotes conservative and business-oriented bills in state legislatures that are run by Republicans. The group includes multiple state legislatures and corporate representatives who work together to create “model bills” that are then used as the basis for legislative actions across the country. Past members have included AT&T, Comcast, Time Warner Cable, and CenturyLink. NBC News is a subsidiary of Comcast.

AT&T, CenturyLink and Comcast each declined to comment for this article.

From 2002 to 2004, the bill was adopted in varying forms in 18 states across the country, creating barriers to municipal broadband in each, according to the Institute for Local Self-Reliance, a Washington-based nonprofit group. North Carolina was the 19th and final state to restrict municipal broadband in 2011.

Alexis Jarrett, press secretary at ALEC, said the model legislation was no longer part of the council’s policy and that “All policies heard at ALEC are proposed by state legislators. In many cases, the policies already exist in the states.”

In Rocky Mount, just north of Wilson and its fiber-optic network, Mayor Sandy Roberson said the lack of competition has resulted in sub-par service for his constituents. The main service provider in the area is Suddenlink Communications, which is owned by Altice USA, the fourth-largest cable provider in the U.S.

“Unlike all of us, Suddenlink has not evolved to meet the demand, nor shown any compassion toward their customers,” wrote Roberson in a letter to North Carolina Attorney General Josh Stein. “Complaints are at an all-time high and we need help from your office to investigate the business practices of Suddenlink Communications/Altice USA.”

The attorney general’s office said it has received more than 650 complaints about Suddenlink since January 2020, as well as letters from several other mayors.

“Attorney General Stein is concerned about this issue and our office has been communicating with Suddenlink and officials in the affected communities, and this process is ongoing,” said Nazneen Ahmed, Stein’s spokesperson.

But Lisa Anselmo, executive vice president of communications at Altice, a telecommunications company that bought Suddenlink, said the company has been in touch with the attorney general regarding its investments in the state.

“Suddenlink is committed to delivering high-quality connectivity, service, and support to our customers in Rocky Mount and across North Carolina,” Anselmo wrote in an email responding to questions from NBC News. “Since 2017, the company has made over $27 million in investments in North Carolina and now more than 98 percent of Suddenlink customers in the state have access to 1 Gig speeds.” (A speed of 1 gigabyte per second is considered extremely fast broadband.)

Roberson said that if it were up to him, he would partner with Wilson and bring Greenlight to Rocky Mount. He sees reliable broadband as essential for the future of his city.

As Jeffery Stanovich struggles with his own connection, he has watched his adult children return home during the pandemic and try to work. But they, too, had to take turns using the internet or it crashed. He said that after NBC News contacted Suddenlink for comment, five technicians visited his home and repaired his internet. But he realizes that not all of his neighbors are as fortunate.

“I can tell you right now, living in a small town has its advantages,” Stanovich said. “But we shouldn’t be at a disadvantage from our access to the internet, because then you’re limiting our opportunities to succeed, and people in this town need this to succeed.”

Hands-on: How to set up the new notification summary feature in iOS 15

Sat Jun 19 , 2021
iOS 15 offers a handful of new features designed to make it easier to manage notifications. This is headlined by a new Focus system, which we covered in-depth last week. Another new feature in iOS 15 is the notification summary. Head below for details on how this works and how […] 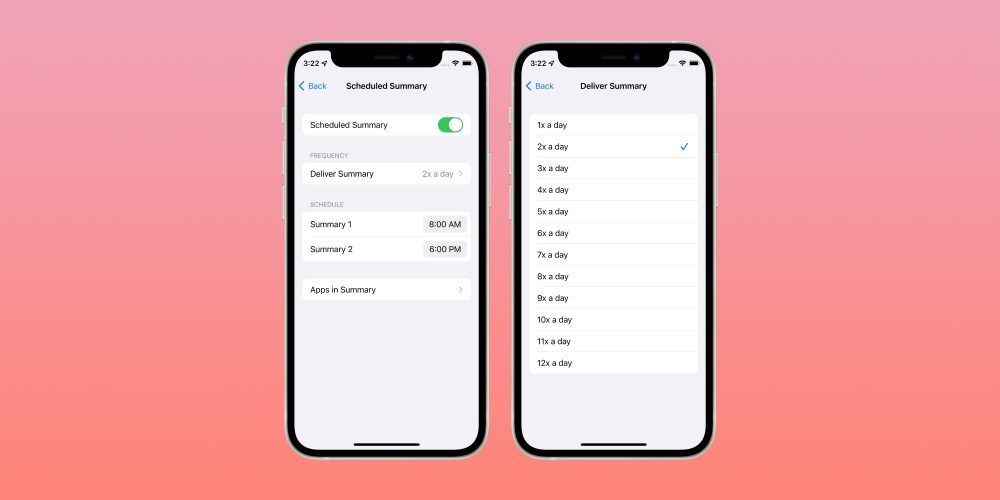