Amazon Prime Day ended Tuesday, but there are still some deals for gamers. We’ve gathered the biggest discounts we can find, including the lowest prices we’ve seen on some of the best games out right now.

Where possible, we’ve highlighted the game at a specific price on a specific platform. Keep in mind that some versions of the games listed are currently priced the same for all platforms, while others are different prices.

NBA 2K21 is the latest in the basketball franchise and the first to jump to next-gen consoles.

Head back to Midgard in the Final Fantasy VII Remake. Buy the game on the PS4, and you’ll get a free upgrade to the PS5 version.

Outriders have players take the role of superpowered warriors who are humanity’s best hope of surviving extinction. (Note: Xbox Game Pass subscribers can already play this game at no extra charge.)

Mafia Definitive Edition is a remake of the 2002 open-world game. Players take the role of Tommy Angelo, who goes from taxi driver to mafia officer during the 1930s.

Demon’s Souls Remake is one title that shows off the graphics power of the PS5. But if you pick this game up, get ready to die a lot.

Immortals Fenyx Rising was one of the early games released for the next generation of consoles. Players play the part of Fenyx, who has to take on the monstrous Typhon from Greek mythology. (Note that this was previously $25; it may go back down.)

Obsidian Entertainment’s The Outer Worlds takes players on a sci-fi space adventure. Decide if you want to be the hero of the story or the villain.

Mario and Rabbids come together for an absurdist strategy adventure. Thanks to a world-twisting vortex, the Rabbids have come to the Mushroom Kingdom, and it’s up to Mario to stop the chaos.

Mechanical keyboards are great for gaming. The combination of the feel and sounds combined with the heftiness make them ideal for people who are spending hours gaming. Razer’s BlackWidow Elite gives gamers that mechanical keyboard feel, media buttons and Razer’s signature RGB lighting.

Subscribe to our daily spotlight on the best tech deals on the web — from phones to gadgets and more.

Thu Jun 24 , 2021
Apple in iOS 15 is making major changes to the FaceTime app, introducing a whole range of new features that turn ‌FaceTime‌ into the ultimate hub for interacting with friends, family, coworkers, and more. Our ‌FaceTime‌ guide outlines everything that’s new in the ‌FaceTime‌ app in ‌iOS 15‌ and iPadOS […] 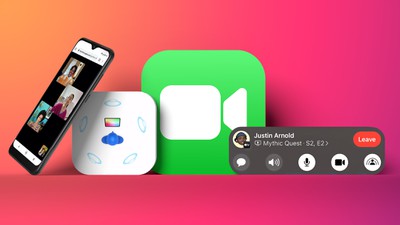