By: Joseph Nichols The computer is undoubtedly one of, if not the most important invention ever created by mankind. It’s profound impact on culture and science has fundamentally changed our society. It has quickly evolved from a basic mathematical calculation device to one of the building blocks of how the […]

The computer is undoubtedly one of, if not the most important invention ever created by mankind. It’s profound impact on culture and science has fundamentally changed our society. It has quickly evolved from a basic mathematical calculation device to one of the building blocks of how the modern world operates. The development of the computer has been essentially based around making it smaller and faster, which has happened rapidly over the last 50 years. The future will surely include this same pattern, as people find new ways to improve efficiency. From the computer’s early predecessors to the infinitely faster supercomputers of today, the future of computer technology will feature improved quantum computing and artificial intelligence.

The development of where computers are today has been a long journey for scientists. The first iterations of the computer were designed to help scientists and businesses with routine calculations to increase efficiency. One such device was the difference engine, created by Charles Babbage in 1832. According to the Britannica page on the developmental history of computers, “this advanced calculator was intended to produce logarithm tables used in navigation. The value of numbers was represented by the positions of the toothed wheels marked with decimal numbers,” (Swaine). This revolutionary device was one of the first stepping stones toward developing the hardware behind the first traditional computers.

The next major step toward the modern computer was a device called the Analytical Engine developed in the 1930’s at the Massachusetts Institute of Technology. This device was used to help mathematicians solve complicated differential equations. While this device was limited to just solving this one type of calculus problem, the basic principles behind how the machine operated were instrumental in the journey towards the first iteration of the computer that we know today. For instance, the Analytical Engine introduced a central calculating unit that was fully programmable; which would evolve into the central processing unit (CPU) that today’s computers are built around. From the 1930’s, computer technology rapidly progressed as governments wanted them for national security and war. The worlds top research institutions and tech corporations have worked and competed for decades to improve computers, making them smaller and more efficient for the everyday person and scientists alike.

That brings us to the state of computer technology today. Since it’s early beginnings, computers have come a long way in their development. Today’s computers are a trillion-fold faster than computers from 50 years ago. This is mainly due to transistor chips in the CPU being made smaller. The smaller the transistors are designed, the more that can be fit in the CPU which will increase processing power.

Moreover, computers are no longer just in expensive research labs. People all over the world have filled their houses with computer based devices. Smart phones, cars, TVs, and even watches contain computers that do the bidding of their user. Because of the mass integration of computers and society, people have seen many changes in how the world operates. According to an essay written by computer scientist Jerome Cox, “Computer technology and, more broadly, information technology, are bringing about a fundamental transformation in our society from an industrial economy to an information economy,” (Cox). Almost all jobs now involve a computer and some way shape or form. As Cox said, our society and economy is adopting computer technology to structure itself for the future.

There are two innovations that are most frequently brought up when talking about computers in the future; quantum computing and artificial intelligence. Both innovations will play a major part in each other’s development as well as the development of most future technology.

Quantum computing is an intimidating sounding topic, but really it is just a relatively simple way that scientists are using to increase computation efficiency. It basically uses The principles of quantum entanglement to allow a computer to make decisions and run through algorithms at a much faster rate. According to IBM’s informational page on quantum computing, “Universal quantum computers leverage the quantum mechanical phenomena of superposition and entanglement to create states that scale exponentially with number of qubits, or quantum bits,” (Fisher). In simpler terms, because of quantum entanglement and the use of qubits, quantum computers can solve much more complex problems than the average computer at a much higher speed. Normal computers don’t have the storage space or the ability to analyze as many possible solutions as quantum computers, allowing scientists to find solutions to problems that even the world’s fastest supercomputers have been stumped by. The video shown below gives a more in-depth explanation of the technology.

There are a variety of applications for this type of technology that are already being studied by scientists. For instance, the concept of molecular modeling using computers has been very difficult with our current computers. Molecular modeling is a method of precisely simulating the interactions of molecules as well as finding the optimal configurations of said molecules.

Artificial intelligence technology is set to play a massive role in the future of computer development as well as most other technology. In layman‘s terms, artificial intelligence is when a program is created to simulate human intelligence as well as their learning and problem-solving abilities. There are already early iterations of artificial intelligence used by the public today, such as Alexa from Amazon and Siri from Apple. These AI are very limited in their abilities and have not scratched the surface of where the technology could possibly go. The possible applications for artificial intelligence are endless; they could be used to improve efficiency and accessibility almost anywhere. For example smart homes have already begun to become mainstream as people have the ability to control almost any piece of technology in their home through voice commands. According to an article titled “Artificial Intelligence and the Future of Humans’’ from the Pew Research Center, “They said “smart” systems in communities, in vehicles, in buildings and utilities, on farms and in business processes will save time, money and lives and offer opportunities for individuals to enjoy a more customized future,” (Anderson). This technology is perfect for helping people have a greater control over their homes and businesses which will in turn save money and improve productivity. The author, Janna Anderson, goes on to talk about how the incorporation of artificial intelligence could have a profound impact on improving public health programs and nutrition through faster storage and analysis of data in these smart systems.

While most people think of talking smart homes when they discuss AI, the most important future application of artificial intelligence will be in the medical industry. The possible uses for this type of program could have the ability to save millions of lives. According to an article from the University of0 Southern California’s website, “AI algorithms will enable doctors and hospitals to better analyze data and customize their health care to the genes, environment and lifestyle of each patient,” (Gammon). To elaborate, because artificial intelligence can quickly analyze a lot of data and compare it to other cases, doctors can use this technology to create customized treatment plans for sick patients that will be much more effective than anything they can do currently. For example, if a patient was diagnosed with cancer, the doctors could use artificial intelligence to study the patient’s health, lifestyle and genetic data. The AI could also then compare the given data to other patient’s data. After these processes, doctors could make a much more well-informed decision on how to treat the patient’s cancer based on statistical data. The implications of artificial intelligence technology on medical treatment efficiency and success could be instrumental in providing a higher level of healthcare to people across the planet.

How to Keep Your Business Safe From Cybersecurity Threats

Wed May 12 , 2021
As a small or medium-sized business owner, you may not think your data is vulnerable. Unfortunately, this simply isn’t the case. Approximately 28% of all cyberattacks involve a small business. Remember, all data is valuable, which means it is up to you to take steps to protect the data you […] 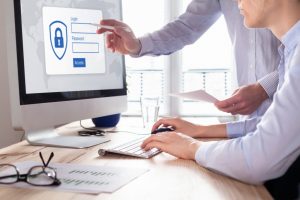