The Pegasus spyware forced French President Emmanuel Macron to completely let go of his iPhone and his phone number after reports claimed that the Israeli-made malware infiltrated numerous Apple smartphones. 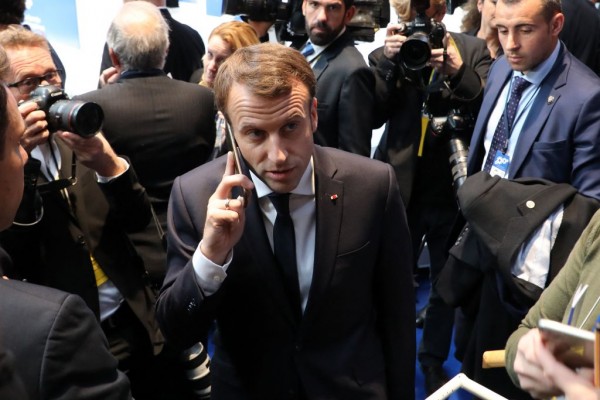 (Photo : by LUDOVIC MARIN/AFP via Getty Images)
In this photo taken on November 17, 2017 France’s President Emmanuel Macron (C) speaks on the phone during the European Social Summit in Gothenburg, Sweden. – French President Emmanuel Macron called an urgent national security meeting on July 22, 2021 to discuss the Israeli-made Pegasus spyware after reports about its use in France emerged this week, a government spokesman said. A consortium of media companies, including the Washington Post, the Guardian and France’s Le Monde, reported on Tuesday that one of Macron’s phone numbers and those of many cabinet ministers were on a leaked list of potential Pegasus targets.

Not just that, the entire office of the French leader also implemented an overhaul of security protocols, the BBC reported.

The move came after an outlet claimed that Morocco monitored at least 14 prime ministers from Europe. The authorities from the accused country responded, denying that they used the Pegasus spyware, in which they dubbed the allegations as both false and unfounded.

In hindsight, Pegasus is a type of spyware virus that potentially infiltrates iPhones and other smartphones. It could then access the messages, calls, and other sensitive data of mobile device users.

Interestingly, a security firm from Israel that goes by the name NSO Group produced the spyware in 2016 for various purposes.

The Washington Post reported that the virus easily plants into devices via essential apps, such as emails, chats, and even by simply answering a call from WhatsApp.

The outlet further revealed that the Israeli government allegedly uses the manufactured malware to spy on other people. That said, it is important to note that the Pegasus, due to its power, is definitely a dangerous tool that could be abused when used inappropriately.

Meanwhile, Amnesty International published a study that showed that the Pegasus malware could hack an iPhone without the user clicking anything. It further revealed that updating the Apple device to the latest security patch does not fix the issue.

Read Also: iPhone Spyware Found Secretly Used by One City in California For $15,000? Here’s Why It Is Alarming

Notably, the French leader previously included two iPhones on his official portrait. It was then distributed in the embassies in France, police stations, and city halls, The Verge reported. Not to mention that the photo was printed for over 50,000 copies on July 29, 2017.

Meanwhile, 9to5Mac noted that Macron has previously been seen using an iPhone, suggesting that the deliberate inclusion of the Apple product in the official image sends a message that he is a tech-savvy president.

Aside from the mobile phones, the photo also showed three books on his desk, namely Charles de Gaulle’s Memoirs of War, Stendhal’s Red and Black, and André Gide’s Novels and Narratives.

Sat Jul 24 , 2021
A screenshot of the Lanebreak beta. These might end up being different from the final product.Image: Peloton Peloton’s been busy these past few months, releasing new features at a steady clip. The latest? A fitness video game beta called Lanebreak that marks the company’s first foray into gaming. Lanebreak is […]