Peloton’s been busy these past few months, releasing new features at a steady clip. The latest? A fitness video game beta called Lanebreak that marks the company’s first foray into gaming.

Lanebreak is a departure from the classic instructor-led classes Peloton’s known for. The concept seems similar to your typical rhythm games, except instead of tapping your screen, you’re incentivized to pedal at a certain cadence or resistance along a Tron-like virtual highway. The resistance knob lets you pick between lanes, with the easiest on the left and the hardest on the right. In each lane, there are also various challenges (i.e., breaking obstacles, filling up gauges, etc.) that are synced to the beat. For example, “pickups” are points that a player collects when they stay on the right track and match a song’s beat and tempo. “Streams” are visible “veins” that appear in various lanes that gives players points based on how well they match a cadence range. Lastly, “Breakers” are objects that require you to reach a certain output in a limited time period—like two measures in a song to build up to a certain level of power. There also seems to be a social element, as users can redeem points and challenge other members.

Like with Peloton classes, users can choose between different music genres and playlists, workout types, difficulty levels, and duration. Right now, Lanebreak is only available in beta to roughly 1,000 users and the details, look, and mechanics might change by the time the beta opens up to members this winter. (The game is set to officially launch in early 2022.) That said, you’ll need to own a Bike or Bike+ to take part.

If you’ve been paying attention to what Peloton’s been up to recently, this isn’t surprising. The company also recently relaunched scenic rides and runs, which allow users to virtually work out with their favorite instructors in exotic locales. Gamification has always been part of Peloton’s DNA with leaderboards, badges, and new features like the Strive score. Lanebreak seems to be an extension of all these elements.

“Content, specifically our instructor-led content, is the heart of Peloton. We continue to lean on that to push us forward, but the reality is that people want variety,” David Packles, Peloton’s senior director of product on Lanebreak, told Gizmodo. “People look to scenic rides, to scenic runs, Just Ride, and Just Run as a way to switch up the routine. We’ve always wondered, ‘Is that it? What other formats could we actually experiment with?’”

Packles also noted that though they’re still in the early stages of development, the intent is for Lanebreak to have a minimalistic feel, be heavily based on music, and have good replayability.

“Newness and continuing to grow our library is a core tenet of Peloton, so we’ll be making sure to regularly add levels [for Lanebreak],” Packles said. “This is something that we will continue to evolve our library for, just like we would our Peloton library.”

It makes sense. Peloton is the de facto leader in the on-demand workout space, and if you’ve ever met a die-hard Peloton fan, they definitely have a favorite instructor. (Cough, Cody Rigsby, cough, Sam Yo, cough.) That said, instructor-led classes simply aren’t everyone’s cup of tea. Packles says the hope here is to perhaps appeal to a wider range of people who might be into fitness gaming, but maybe not Just Rides or traditional classes.

There’s also the fact that more people became interested in fitness games during the pandemic. For example, it was nigh impossible to find copies of Nintendo’s Ring Fit Adventure during the early days of lockdown. Supernatural on the Oculus Quest was another popular choice. VR fitness in general has been called one of the rising fitness trends of 2021. Peloton, which also reaped the benefits of the at-home fitness craze, seems like a natural fit for some kind of gaming element given all of its hardware comes with big, beautiful displays.

While the beta is currently centered around Bike and Bike+, Packles hasn’t ruled out bringing something like this to the Tread (once, you know, the recalls are sorted out).

“We believe that creating experiences at the intersection of fitness and gaming is a very exciting space,” Packles said. “And it’s certainly not restricted just to Bike. Our focus right now is on Bike, as it’s our first foray into this world.”

Peloton also recently announced it’s building a $400 million factory in the U.S.  This, combined with recent rumors that Peloton may be gearing up to release its own wearable, hints the company is bullish about its future, unfazed by the bad press surrounding pandemic-related shipping delays and the recent recall of its treadmills. There are currently more than 5.4 million Peloton subscribers, and the community is extremely loyal.

Sat Jul 24 , 2021
Apple in iOS 15 made some updates to notifications, improving how they look, how they’re delivered to you, and the control that you have over them. This guide covers all of the changes that Apple made to notifications in the iOS and iPadOS 15 updates. New Look for Notifications Notifications […] 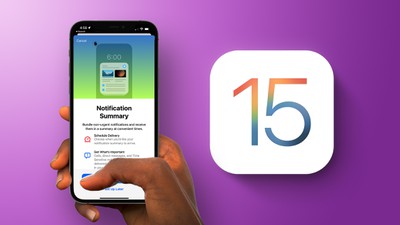