“How to Build a Life” is a weekly column by Arthur Brooks, tackling questions of meaning and happiness. Click here to listen to his podcast series on all things happiness, How to Build a Happy Life.

In 1995, decades before she began assisting with research on this column, Rena Rudavsky and her family were selected to participate in a novel psychology experiment: Researchers at Carnegie Mellon University would install a computer in their dining room and connect it to the internet. At the time, only 9 percent of Americans used the internet (in 2020, nearly 91 percent did). Rena, then a middle schooler, recalled sitting in front of the computer day after day, participating in chat rooms and surfing the internet. When she finished, another family member would take a turn.

Strangely, this experiment didn’t spark much discussion in her household. “We did little conversing in the dining room when the computer was on,” Rena told me in an email. Furthermore, “none of us shared our private internet experiences with others in our family.”

Rena’s experience was typical, as the researchers showed when they published the now famous “HomeNet” study in 1998. “Greater use of the Internet was associated with declines in participants’ communication with family members in the household” and “declines in the size of their social circle,” the researchers wrote. More ominously, it led to “increases in [the participants’] depression and loneliness.” Rena says her experience bore out these findings.

HomeNet could be (and has been) interpreted as an indictment of the internet, or screens, or modern communications technology in general. In truth, it illustrates a much simpler truth about love and happiness: Technology that crowds out our real-life interaction with others will lower our well-being and thus must be managed with great care in our lives. In order to reap their full benefits, we should use digital tools in ways that enhance our relationships.

The coronavirus pandemic has created a fertile environment for research on social connection. Anytime the circumstances of social life suddenly change, researchers like me rush in with our clipboards in hand, asking annoying questions. One of the most common areas of inquiry over the past couple of years was how our sudden mass shift to digital communication—away from face-to-face—affected overall social connectedness. In one paper in the journal New Media & Society, researchers studied nearly 3,000 adults during the pandemic’s early months and found that email, social media, online gaming, and texting were inadequate substitutes for in-person interactions. Voice and video calls were somewhat better (although later research also questioned the value of those technologies).

Read: Ignoring people for phones is the new normal

Social connectedness is a key to happiness. Lower it, and you will be worse off—and so will your loved ones, especially your kids. One 2014 survey revealed that 62 percent of U.S. children thought their parents were too distracted to listen to them; the No. 1 reason was parents’ phone use.

The way that solitary diversions such as scrolling or surfing reduce social connection is clear: You do them instead of interacting. But virtual communications such as texting are by design interactive and should theoretically be less harmful. The problem is that with these technologies, we lose dimensionality. Text messages can’t convey emotion very well, because we can’t hear or see our interlocutors; the same goes for DMs on social media. (More often, social media is used not to communicate with one individual but to broadcast to a larger audience). These technologies are to in-person interactions what a black-and-white, pixelated version of the Mona Lisa is to the real thing: identifiable, but incapable of producing the same emotional effects.

With low-dimensionality communications, we tend to hop from person to person and thus swap depth for breadth. That’s why face-to-face conversations tend to be more expansive than those conducted over text. Research has shown that deeper conversations bring more well-being than short communications. Meanwhile, in a recent longitudinal study, teens who texted more often than their peers tended to experience more depression, more anxiety, more aggression, and poorer relationships with their fathers.

It might seem strange that—even outside the circumstances imposed by the pandemic—we would voluntarily adopt technologies that hurt our happiness. There are two major explanations: convenience and courtesy. Vegetating in front of a screen (which nine in 10 American teenagers say they do to “pass time”) is simply easier than talking with a person, and virtual communications such as texting are faster and easier than a visit or a phone call. Think of these technologies as grab-and-go food at a convenience store: It’s not great, but it sure is easy—and after you eat enough microwave burritos, you forget what the real thing tastes like.

As texting and social media have proliferated, many people worry that reaching out via old-fashioned communications will be cumbersome for others. I once asked one of my adult kids when he was texting a friend why he didn’t just punch in 10 numbers and talk to the guy. “It would be rude,” he answered. In 2019, researchers found that long-distance families often favor asynchronous communications such as texting to minimize intrusions into others’ time. That’s not to say the trend is universal; I call all of my kids almost every day on FaceTime (and pretend not to notice their annoyance).

Abandoning the internet and eliminating virtual communications from your life is clearly not the answer. Doing so would isolate you and compromise your ability to make a living. Based on the research, however, you can learn to use technologies to complement, rather than substitute for, your relationships. Here are two ways to do so.

There is nothing revolutionary about this rule—45 years ago, I was told by my parents to go outside with my friends instead of watching television. The difference now—besides the fact that the television didn’t fit in my pocket—is empirical evidence: Today, we know that, in excess, solitary and screen-based diversion lowers happiness and can lead to mood disorders such as depression and anxiety.

To knock you out of suboptimal habits, make use of device options that inform you of the time you are spending on social media and the internet, and limit yourself to an hour a day or less. Another popular approach, which has not yet been tested in academic research, is turning your devices from color to grayscale. My son did this and swears it has massively lowered his vegetation time.

It’s unreasonable to expect anyone to stop texting, but you can turn to it less if you have an “order of operations” in place for talking with your friends, co-workers, and loved ones. When possible, make an effort to meet in person—especially with your intimates. A 2021 study in the journal Computers in Human Behavior Reports revealed that the more face-to-face communication people had with their partners, the more understood they felt and the more satisfied they were with their relationship. When meeting up is impossible, use face-to-face technology or the phone. Text or use similar technology for only impersonal or urgent matters.

Rena’s formative childhood experiment made her think deeply about the internet’s effects and has had a lifelong impact on her use of technology. She had a Facebook account in college but deleted it after graduating, and she’s never gone back. She avoids other social-media networks, and her children have no internet presence.

By today’s standards, her life might sound old-fashioned. Her daughter knocks on neighbors’ doors to visit. The family sits on their stoop after dinner, chatting among themselves and with passersby. She writes and sends letters. When she does use technology, it’s as a complement to her relationships, not a substitute for them: She maintains a parent text group, for example, but only to set up in-person activities.

For most of us—especially people who grew up with it—the internet is an unquestioned part of the ecosystem of life, seeping into every crack and crevice independent of any conscious decision on our part. We’re not going back to life before this kind of technology, of course. We can and should, however, use it mindfully in service of love.

Wed Oct 5 , 2022
When you download a software or a game on your Android system, you will receive an APK file. Upon running these files, it will install the downloaded app. Sometime, however, instead of an APK file, you may be greeted with XAPK files. Although you might be concerned about viruses, these […] 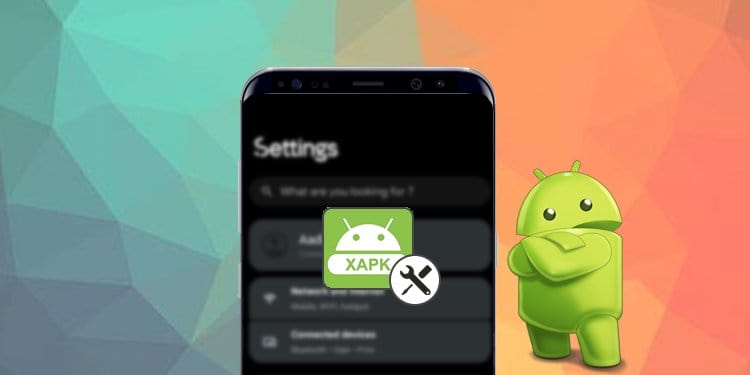